The sixteenth card of the Major Arcana holds an image that most people immediate recognize and associate with disaster. Is the connection real? Has the modern era somehow changed with time the meaning of the 16th Arcanum? What is the process or the archetype behind the Tarot imagery? Where is the root or the Source of the image? What does it really point to in Hermetic and metaphysical teaching?

To be fair I will look at three Marseille decks images. Left to right below are:  The Jodorowsky- Camoin, (France,) The Thoth Tarot (UK) and El Gran Tarot Esoteric (Spain).

Some alternate names for the image are The Lightning Struck Tower, The Ruined Tower, The House of God, and The Hospital.  A traditional reference is made to the ancient Tower of Babel.  A more modern connection is with  Tesla’s Long Island, New York, Wardenclyffe Tower never completed and dismantled on July 4, 1917 . The world’s first wireless transmission tower. The cultural lyrical reference is the song : “Skyfall” by Adele, the title song of the 2012 James Bond 007 movie. 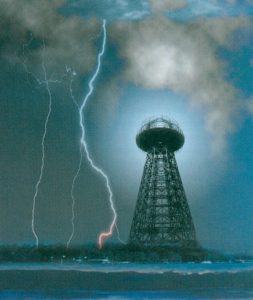 Wardenclyffe, or the Tesla Tower.

All of the images share 1) a vertical structure and 2) electrical energy / lightning and 3) contact of the electrical blast with the tower. In the J.C. Marseille people are falling from the Tower. In The Book of Thoth one sees no people only a dove and serpent and flames emerging from the open mouth of a beast. The Spanish deck shows only the burning tower. In the case of Wardenclyffe photo as was mentioned the whole tower was felled.

The Hebrew letter associations for the card of course varies according to system and or lodge. In the case of Crowley and the Golden Dawn the Tower is associated with  Ayin ( symbol of the eye) while  Mouni Sadhu’s Hermetic system uses  Phe (symbol of the mouth) for this card.

This is a two part post. Take a look at the images here and pull out your own. Jot down a few notes.