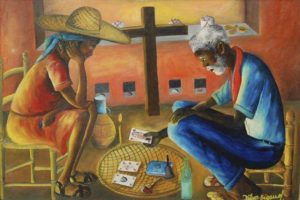 The energetic connections between the people involved with a Querent are openly shown in any Lenormand and Kipper GT. The terminology of a “third party reading” seems to have emerged in late 20th century when Tarotists formed exclusionary guilds to distance themselves from the swelling New Age hordes of fortune tellers claiming psychic powers.

However, in Tarot and playing card readings even smaller spreads will automatically show persons involved with any situation asked about by a Querent. Then it becomes a matter of how the question is asked and the context, the new “sleight of hand” used by the reader to “shift the blame” for any violation of privacy. What privacy?  Privacy in the 21st century age of information pirates or hackers is an antiquated construct.

The blind spot of the Querent is the reason why they are searching and it is also the mote in their eye which cannot be removed by another person. Truth is participatory when and if the reader has the skills to present it to their Querent. Diviners reveal and Oracles are the mouths used by Spirits. Neither are obliged to respect the limitations inherent in man-made and defined “third party” rules.