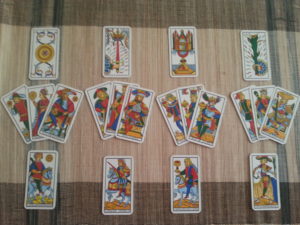 The royal arcana are 16 in number. They are shown under the Four Aces of the Minor Arcana in the photo above because of the heavy influence the elements have on the Royal Arcana.

It is from the royals that a Tarot Significator  is chosen.  Divination operations like the ” Opening of the Key” require a significator to represent the Querent. The archaic “complexion” method of selection used both in Tarot and in playing card reading as well is based on an element to suit transferal. As an example, the Queen of Wands as the Queen of Fire is also the Queen of the South and hence should equate to the darkest skin tone but… not so in the traditional selection methods where the fire is equated to light and she is a pale red head.

The elements can be used in selection of a Significator as Wands = Fire; Cups= Water; Swords= Air and Disks= Earth. Each card in the Royal Arcana however is a combination of two elemental forces:

The royals or court cards besides having an elemental allocation have a zodiac correspondence. Since there are 16 Court cards and 12 zodiac signs the reader has to decide upon a system of correspondence. Once done they simply apply the method.

As an aside, in my work with Tarot I do not use reversed cards but elemental dignities to see how energy in a reading  either flows or is blocked.

Removing the four Knights from consideration leaves twelve court cards*. These are then classified as being cardinal, fixed or mutable signs in the zodiac. So in my approach the King of Wands would be the cardinal sign Aries, the Queen of Wands the fixed sign Leo and the Page of Wands a mutable sign Sagittarius. This is how the sun sign can be used to select a Significator.

The Royals or court cards represent psychological influences on the personality matrix in  Tarot divination.

* I chose to take the Knights out when assigning zodiac signs because they are absent from the standard deck of playing cards.