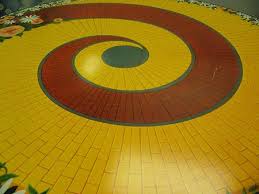 The reason why I am writing about intermediate lenormand is I have worked through and emerged from that stage. After years of intensive lenormand method I am still observing how lenormand readers of experience and various mother tongues / language have limited their reading technique choices. No so called ‘professional’ reader throws in every technique available including the kitchen sink in an attempt to “cover all the bases” and basically ignores the actual question asked by the client during their interpretation.

Keywords box a reader in. The core concept of the sign once grasped allows one to “plug in” the proper aspect or contour of the concept. This contour is not based on a sentence like structure but is a modification of the concept according to neighboring cards. A pat set of keywords becomes a dam which will not allow the lenormand current to flow in and assume different meanings based on the question’s context, the unique vessel that each querent’s query represents. Newer readers and older ones working with a Rolodex of keywords keep putting the same round or square pegs in their respective holes on a wooden board be it 3×3 or 8x 4+4, the resulting combinations become too stiff to give specifics. Mastery of lenormand requires the skill of a weaver.

Paired sign meanings in and of themselves do not an interpretation make! If one uses a series of cliches, no matter if you hail from Germany, the Netherlands, France, the Czech Republic or any historic bastion of lenormand divination sooner or later the pat phrases will suck the life out of the reading. Experience simplifies, it does not complicate, or exhibit stiff and rigid interpretations. Experience makes something look easy when indeed it is not.

It is known by traditional lenormand readers that reading a Grand Tableau can be done without learning one combination solely by using the basic meaning of the cards in the near and far technique. This method can and did hold up entirely on its own! The more modern Grand Tableau readers use combinations by house and seated card. All else is direction of the Significator and its environs . The pair combination style of left to right (or top to bottom) reading being shown and taught today is a beginner’s gambit most suited to the 3 X 3 form and lenormand lines.

Interpretation is where the rubber meets the road. An astute lenormand student can tell when going over a reading, if the reader learned their skill via family lineage/tradition, one on one with a mentor, by taking courses, or was self-taught from one or more books.

It is as Morpheus said to Neo in the Matrix film: “At some point you have to just let it all go.” One has to take that proverbial leap of faith. It is the signal that you as a student are ready to jump into the lenormand current. If you have kept your end of the bargain, you’ll read what you “see” and cease to care if you are wrong in your interpretation as you surely will be at times! Fortune tellers are not God and some people do exercise their free-will. Yet, letting go permits one to become open to the energies, principles, concepts, visual cues and playing card inserts that flow in the “lenormand current,” and to relax into the “gestalt” where all the parts are integrated into a seamless whole as the cards in the Grand Tableau come alive.

However, one doesn’t put the cart in front of the horse and not study any traditional meanings or methods of reading the cards and then label the untutored attempts at interpretation as “intuition.” Nope, I am not saying that at all! The letting go always comes after learning the basics by rote. The object of any training is to eventually move beyond the training. The object of lenormand method is to see what the cards are saying, to make the vignette of the Grand Tableau into a movie. It is letting go in spite of any fear of falling which opens one to the receptive state where acceptance of the lenormand current’s gift of grace allows one to put together a “free” interpretation which doesn’t rely on keyword strings, steps, or memorized pairs- the training wheels you used when you were first learning how to “sight read” or ride the Lenormand bike.

A masterful interpretation should not allow the casual reader or listener to identify or pull out keywords like one pulls shrimps out of a runny gumbo. It should be conversational in tone. Our concoction to use another cooking analogy should be more the smooth bisque where the flavor is delicious and delicate but the palette of the average taster can’t identify each individual ingredient used in the recipe or run off into the kitchen and whip up one just like it. Nor should a good interpretation contain excess repetition, like the best Lenormand decks the reader should keep their speech lean and concise.

This just to remind the serious students that just as sight reading i.e, ability to decipher pairs without lists marks the beginning of the intermediate level and directional reading is the meat of it, once over the threshold of the intermediate phase there is a different goal.

I first introduced the term lenormand current in 2011 and defined it as the transmission of knowledge passed from teacher to student in the old days. It is my belief that this current survives as an energy field which disciplined and committed users of the lenormand cards can link and connect to which bestows a level of interpretation which comes from the voice of the lenormand oracle, itself.