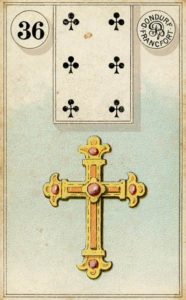 The Cross is one of the lenormand cards which can in a short line or in the larger Grand Tableau be used as a timing marker. Some consider the lenormand method to require pairs to “speak,” but this is not always so as one develops in reading the symbol language of the deck.

In a single line the Cross can be used to tell what has already occurred and what will occur in the future.  Position being determined by where one enters or begins to read the cards, i.e the left or right side.

For example if one begins reading a five card line on the left and the fourth card is the Cross then one will see:

the situation from pair AB has already occurred and BC is ongoing. The future is coded in the 36 pair or DE.  Since the pair starts with the Cross card, it forecasts a difficulty and the modifier, here card E will describe in what area it surfaces.

In the GT example of course the pairs are formed by the combination of the house (dominate theme) and the card seated in it( the modifier).

To continue the past and future on the arms of the Cross card are determined in a GT by noting the direction in which the Querent card faces, i.e. card 28 or 29.