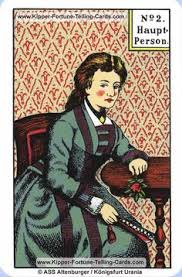 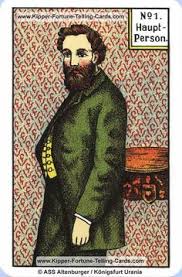 The Kipper system  has two very important cards: the MC1 and the MC2. They are the main characters and represent the Querent, i.e. the person who is asking the question or the person whom the reader is being asked to read.

The MC cards are gender based as Kipper is a traditional system. So one must assign them based if not on physical gender, the preference of the Querent.

Kipper readings are directional so it is imperative one see the position of the Querent and what is before them in their line of sight i.e. where they are looking as well as what is immediately behind them.

This is the basic first step of all the Kipper reads I have learned to date.

When one encounters the techniques involved in learning a new system, there are many what if’s . Yes, there are numerous people cards in the Kipper deck of various ages and sexes but the MC1 or MC2 are the ONLY Querent cards. The other people in the deck are people in the Querent’s life. In psychological reads the other people cards may represent aspects of the Querent i.e. roles he or she plays  or assumes, but these people in the deck while acting as significators can never overshadow or completely take over the primary role of the Querent -the MC1 or MC2.

To ask a question without first placing or using an MC card first is a bad habit.  Why? The placement of the MC card happens BEFORE the reader shuffles. It is removed from the deck as one is asking and usually gazed upon by the reader.

The MC 1 and the MC 2 tell us how to place the cards and what direction we read them such as when using a Line of Sight spread where with the MC1 or the male we follow his gaze right to left and with MC2 the female we read left to right.

In the  MC spread or 3 X 3 the MC in the center determines how we place the cards to complete the layout.

Mixing traditional with modern spreads early on can come back to bite one in the rear further down the road for it allows beginners to interpret a group of cards without first placing the MC. So when students start replacing the Kipper MC card with other “people cards” or significators based on the type of question they are asking, it is either 1) a logical progression from their introduction to and  early usage of a non-traditional spread or 2) applying lenormand reading methods to Kipper cards. Nicht gut as they say in German- not good!