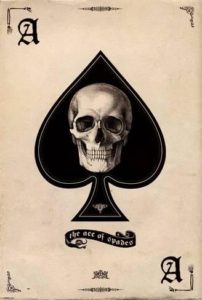 Autumn  is about falling leaves. It is the season when one begins to contemplate the suit of Spades. This is instinctive for the spade as emblem reminds one of a tree leaf. Leaves hit the ground as the Earth  prepares to enter the Northern quarter in my neck of the woods. The black gate of the North is imagined in my mind’s eye as embellished with spade scrollwork.

The cards of the Spade suit for me are a story which begins at the Black Gate itself or The Ace of Spades which is symbolically the power of the Dark Arts. Close behind the Ace is the Jack of Spades, the Great Hellhound who guards the Dark Castle (10 of Spades) and those who live in it, the King and Queen of Spades.

The Spade pips tell of those in or around the Dark Kingdom from 2- 5 show the ranks of the Dead. The 6 of Spades is  The Corpse Road or the Roads in Hell, while the  7-9 of Spades speak of those entities in limbo- neither here nor there, those who are “undone” their bodies lost or in pieces and those self-exiled aka The Wanderers.

So as we approach All Hallows, the Invisibles have freedom to visit or interact with the physical realm as long as the leaves change and fall  from the trees. This permission is rescinded at midnight Nov. 1st or Judgement Day when the Dead are rounded up to return to the Underworld and the gates are locked leaving the stragglers i.e. the 7, 8 and 9 of pips outside to find shelter in the long shadows of winter.  Once all is secured  the Underworld Royals throw a great party which lasts for 30 nights, at least so it seems from this side.