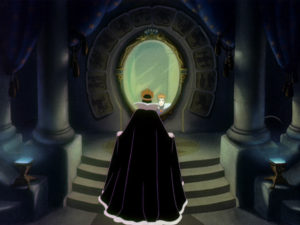 In the years of reading cards I have learned many systems in addition to the Marseilles Tarot I began with. What I have found is the secret to mastering any form of Cartomancy has nothing to do with the years one has been “at” it. The ability to read the cards comes with learning the basic techniques but understanding the essence of the cards is revealed, i.e. it comes out of one’s personal connection to their deck and the system itself.

A deck is a tool an oracular device. Oracles have guardians. These guardians are non-corporeal intelligences. When someone says they “heard” the Voice of an Oracle they are not exactly speaking in metaphors.

For those who are clairaudient the Voice of the Oracle is heard in the physical realm in their head with a distinctly different tonal expression from 1) their own inner conscience or 2) their personal ego.  These are recognized as the proverbial “higher” and “lower” selves shown more accurately in fable iconography as an Angel and  Devil who sit on the person’s shoulders whispering  in either their left or right ears.

The Voice of the Oracle in the the non-physical realms of the etheric, astral and mental is heard by the Seer as an actual voice. Think of the Fae-Rae tale of Snow White where a Mirror, the universal symbol of the astral plane speaks with an actual voice to answer the questions of the Evil Queen.

Again, readers who are not clairaudient will not hear a deck Guardian speak. However, each deck has a card to represent the Guardian. This is part of the folklore of the cards. The signature card is not a matter of choice to be assigned by the reader but comes from traditions associated with the deck. However, the caveat is one has to search out this knowledge on their own, as only then can it be revealed.