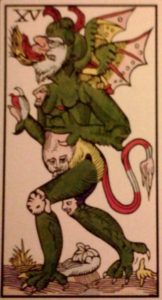 The Devil is perhaps the most popular Marseille Tarot card of the entire deck and the most readily recognized. My favorite Devil is found in the Tarot de Jacques Vieville as redrawn by Roxanne Flornoy.

Seen on the left it is the most engaging Devil I have ever seen in a Tarot deck period! The Flornoy cards are not easy to come by so I will show the image here to aid in comparisons.

The J&C TdM deck shown below has a bit more symbology than most decks but less agency than the Vieville.  The Devil is standing on a globe. The minions are tied to the same globe and also stand. Standing in Tarot symbology indicates an active energy or force.

This devil has antlers not horns is winged, blue, naked and dual sexed. It has the breasts of a female and the bottom parts of a male. It has a face smiling out from the solar plexus region, eyes at the knees and clawed hands and feet.

The blue skin indicates the sky, symbol speak  for mental levels. This is also why the devil stands on the globe. The wings symbology affirms the power moves in the thoughts as a function of  the mind. 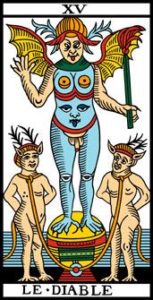 Of course there is much more. I will be showing two alternate Devil cards in the next post to conclude this discussion. One will be from T: The Aquarian Tarot by the late John Starr Cooke, the original hippie deck, the other from Crowley’s  Book of Thoth. So review the symbols on the TdM cards shown above and stay tuned for part two.