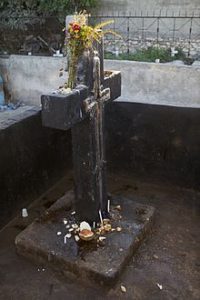 The Cross is a negative rated card found in the Lenormand deck as the final card of the series. Lenormand also has a Coffin card which has a neutral rating. In Kipperkarten, the two concepts related to endings are combined  on Card 19, Death which shows a wooden casket with a cross carved on the lid. Many readers have issues with any card which represents a change to the status of a sentient being’s vehicle especially those pointing to the permanent end of a cycle.

Birth and Death are essential parts of existence. All events and phenomena are timed. They have a beginning, a middle and an ending. For some readers this three point process is shown by reading the cards on the left and right side of the Lenormand Cross. In Kipperkarten readers use the head and foot of the Coffin. We as the living, deal with our place in Time. We  move through Time and it moves through us as well, even when we are perfectly still our planet spins.

A reader needs to acquaint themselves with the unseen world of energies and make peace with it. A failure to do so out of fear or a disbelief in the Afterlife limits the development of one’s ability to help those they advise. One must acknowledge the many small deaths and permanent ending which occur over a person’s lifetime. We shed or lay some burdens down and move on to take on new and different challenges.