According to Wikipedia, The Cloud may refer to:

These are the techy picks, the public domain contains many references to and titles of  The Cloud;  however, our matter is plural. We are looking at the sixth card in the Lenormand deck, The Clouds. 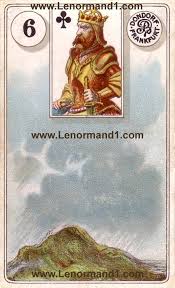 My first encounter with the lenormand Clouds was the indistinct Dondorf/French Cartomancy version. Eventually after much frustration I ended up colorizing the card with a permanent black marker to give one side an obviously darker hue. 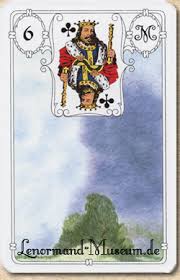 The Clouds card as shown above is more in line with the mini deck I use for quick reads – a Russian version of the standard Blue Owl deck. In this version  one cannot make an error – left or right are clear and the greyness in the center bottom reminds one how to judge the card in a 3 X 3 or a Tableau.  The Clouds overhead are a warning to whoever or whatever is directly underneath. It looks like rain, take heed and have an umbrella at the ready!

However, as the blog title proclaims we are not here for the troubles of beginning readers but for the development which comes  from “using” the cards for a time. As I approach my seventh year with the system the learning continues as to how the cards work on levels above and below the threshold of the obvious.

The Clouds in lenormand method has a connection to the Cloud as it is used in computing. The Clouds card is on the mental -causal plane. In a reading it speaks to the Querent’s  mental state. In proximity combinations with a card for the partner, child, siblings, parents, it shows their mind. Near  The Garden, the Clouds  can speak of a group or collective mindset or it can show the Vox populi  public opinion. Again this is interpreted according to the darkside  or lightside positioning of the cards.

Where there is no touching “people” card,  The Cloud shows the Querent’s mind.  The dark side  represents uncertainty,  fears and a general murkiness.  The clear side of The Clouds shows  more ordered thoughts and plans along with some degree of optimism.

In some oracle decks the mind is represented by the symbol of a mirror. In the Lenormand deck the Clouds card is like a mirror. The dark side of the Clouds is the back of the mirror or the subconscious “broodings” of the Querent; while the light side is their conscious thoughts which are reflected outward as their general perspective, Weltanschauung or world view.