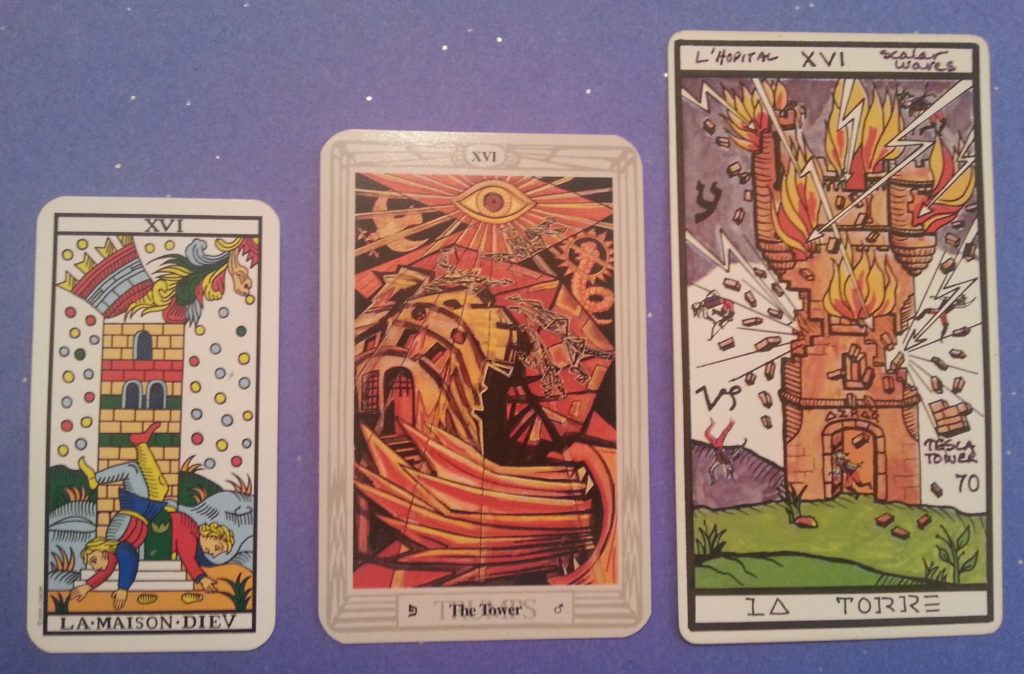 The Tower as a sixteenth ranked Arcana can be reduced to a seven vibration or seen as being connected with the sevens of the Minor Arcana. The number seven relates to visible phenomena or events.

The lightning comes from above in the J.C. deck and El Gran Tarot. Fire symbolizes intelligence, illumination or enlightenment. In some tales the lightning is associated with the Fall of Lucifer, the Bright One. In these two decks the image of fire from heaven hits the turrets of the Tower literally knocking the top of the edifice asunder.

Crowley’s Book of Thoth changes things up . There are no people images falling instead there are a dove and a serpent. He inverts and then converts placing the fire below. It issues out from the mouth of a Beast as dark red flames. This is the Kundalini or libido rising up as either the dove or serpent which flank the eye of Ayin overlooking with shattered continuity of perception the broken mirror of a fractured landscape.

In El Gran Tarot Esoterico’s version of the Trump there are several bodies falling and one person exiting below in the doorway. The Tower itself is the color of red clay and reminds one of an alchemical athanor or oven blazing.  Here lightning comes down from above and ricochets striking the mid-section of the Tower to create an inferno which consumes the life-force itself.

The concepts mentioned here of daemonic descent as shown in the J.C. Marseille;  the Kundalini rising in the Book of Thoth and the energetic battle of lightning’s electrical dispersion  versus the magnetism of the life-force as depicted in El Gran Tarot Esoterico all share a common point of transfer – the sushumna or central channel of the subtle body. More information is available to you by the practice of image comparison and contemplation.