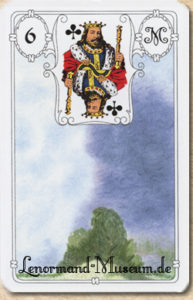 Part of the reason why the German oracles are so effective when they are used in the traditional way is that they are clear and to the point. The skilled reader uses the lenormand combinations or the Kipperkarten scenarios to answer the question. Simple as that!

In the dispersion of energy the Querent also plays a role. It is hard to get one focused question for a read. The question itself spreads over into two or three separate issues, a juggernaut which includes judgements, conclusions and accusations, a knot to be untied  before a wise reader spreads the cards.

The New Age tendency for readers to play the role of “Pollyanna” wearing rose tinted glasses is what defused Tarot rendering it practically useless! The mindset of the average 21st century card reader is one of intuitive meandering in a maze of tall hedges.

It is unfortunate but this attitude has already entered  full blown into the ranks of so-called Lenormand teachers and readers who say they “read intuitively” i.e. without taking the time to fully learn the method as they pluck  flowers in the garden of multiple decks not realizing each deck variation is a universe within the multiverse of  Lenormand or Kipperkarten-  a world within a world!

I am sure these ways will reach deep into Kipperkarten  before the attention of the online card community moves on to the next  trendy oracle deck to purchase, spread and posthaste dilute.