First let’s look at two double cards. The combo 33-08 is in the Blue Owl code the open casket.  Yes, the Coffin can be considered as a double card. It has a head and foot or is shown with a draped side. In Blue Owl imagery, however we see an above ground tomb with an eternal flame.   Close examination will reveal  a knob like protrusion on the top of the left side of the locked coffin. In the old days coffins had keys and were locked after they were occupied. Today, the practice continues with the outer vault which may protect a coffin placed in the earth from decomposition.

In lenormand the 33-08 combo can indicate something is indeed over but the finality of the ending leads to a complete metamorphosis. This is an esoteric combination for it indicates that one has overcome certain restrictions by moving beyond them. It is the card of one who explores dark places others try to avoid.  It is also the code for Necromancy, i.e. the original Dark Art. 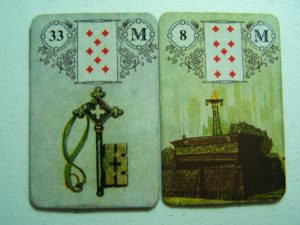 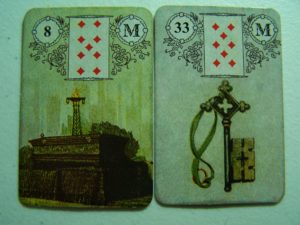 The lower combination 08-33 is the closed coffin . It is the card of seals- a   symbol of initiation into a closed order, vows of silence, unbroken oaths, of secrets taken to one’s grave.

Now mixing up a few  combinations with the Key we see: 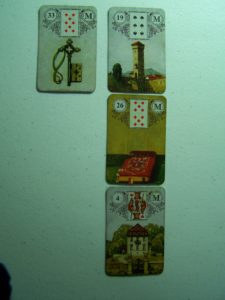 33-19 – opening the Tower. In the middle ages the Tower was the jail. The bit of the key facing the tower functions as the cell being opened. One comes out of their ivory tower of isolation.

33-26- The mysteries of the unknown are shown by  the Book, a double card which bears a lock on the cover in the Blue Owl deck. Having the bit side of the key facing the page side of the Book  shows the locks on the “grimoire” have been sprung.  A great mystery is solved.

33-04- The key with the House shows at one’s residence doors are unlocked. This may show an “open door” policy hence one’s residence is not secure. Take it as a warning for your property and safety.  It can  be a referent to one’s “openness” as the House as home represents the vibration of the person/people who live there. 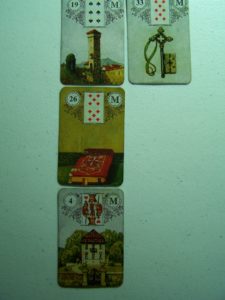 19-33- the door to the cell is slammed close. One is in isolation. Locked into a situation or a mindset.

26-33- the spine of the Book card shows partial knowledge. It is where the title of a book is shown and its author. The shaft of the key next to the spine shows that one’s information is limited to the obvious. One is not privy to the deeper levels of some subject.

04-33- the shaft of the key touching the house shows it is secure- protected from intrusion. It is the feeling of being “snug as a bug …” and of private family matters.