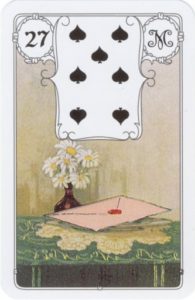 The letter in German traditional lenormand decks is shown sealed. Usually a wax sealed letter was hand delivered  by courier, so it could be anything from a personal note, business matter or an invitation.

Let us see how the Letter pairs up by looking at a few combinations.

10-27– In Blue Owl notation where the sharp blade of the Scythe points towards the Letter it shows a tool- a letter opener. Here the outside of the envelope is of no importance. The seal doesn’t even matter. A sharp blade has already opened the envelope. What is inside has been read.

27- 11 – Here the Birch broom and scourge become the instruments used to write the message. In the Old Days one could see 11 modifying 27 as a quill pen and ink bottle; the quill being dipped in ink over and over until done but today the broom and/or whip could represent fingers making keyboard strokes on a device such as a laptop or I Pad.

27-16– The Letter is always some type of message. When in proximity with the Stars it is often a dream.  Dreams written in the  symbol language of the astral plane can be as precise or as obtuse as any text.

27-19– Here the Letter with the Tower is a message concerning someone or something which is  at a distance or is from a person with whom the receiver has a tenuous connection or is estranged.

27-15– With the Bear an official letter of some sort is described.  It “bears” an insignia on the letterhead.  Could be from one’s employer or from some governing agency.

It is important to distinguish between the text aspect of the Letter (or the symbols of a dream ) and the voiced communication of the Birds, card 12.  In the period when these cards were created the Birds showed an actual face to face conversation. The Birds may  show  a neighbor  who comes in for coffee as well as in more modern times a conversation with the same neighbor over the phone.

The Letter may be a text message, an email as well as any traditional letter.  Times have indeed changed how information is received and sent as well as the speed of the process  but the intention of the Letter in lenormand code remains that it be a PRIVATE communication.

Information may also arrive via courier.  Any person who comes to one’s home or office door with  paperwork or property would be functioning as the Rider card- an intermediary who delivers to the addressee and  immediately departs.  The quick exit is a key to how the Rider differs from the Birds in practice. In today’s electronic dominant world the courier may be a motorized robot or even a drone!

Sharing news after it is received or the Letter has been read is another story which brings one to The Birds or the Rider, as the recipient may choose to either call another person or get in their car and  deliver the news they received in person.