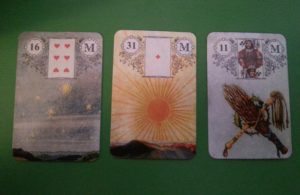 When using the lenormand deck the triple combination Stars-Sun- Birch Rod (16-31-11) as a response to a query may signal magical involvment.

Most define magic as change. My definiton of magic is a shift in thought, circumstances or events by the intervention of a sentient being. So according to the aforementioned definiton, the triple combination 16-31- with 11 signs magical involvement in a short line of five or seven.

The Birch Rod  card 11 is one of control, repetition and ritual. If card 11 falls before the pair 16-31 the magic is being worked. When the Birch Rod falls after 16-31 the magic has concluded and the desired shift or results are manifesting in the circumstances of your Querent. The shift can be a subtle change in thinking or as overt as outside of the client’s control physical changes.

A triple of course means the cards are touching each other as described above but the presence of all three cards in a short Line of Five (which means that two out of the triple will touch) or even a Line of Seven where the three cards may not touch still foretells the “possibility” of outside influences being gathered to affect or sway the client.

In general the triple as a warning  will fall in queries where the context is not about magic.  An attentive Reader then is alerted to the presence of an undercurrent of energy in the affairs of the client and may then proceed to formulate their questions following a new tack.