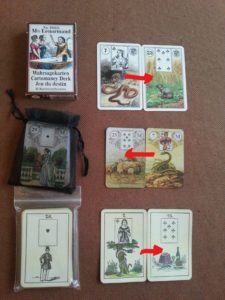 ” Each card master has a bag of tricks. Some traditional and some riffs.”

Card systems have a tradition surrounding them which is based on the way things have been done over generations. Along side of tradition is the folklore of the cards. The folklore is passed along in the songs and stories which are part of the culture of the people. There exists an underground stream or current which refreshes the tradition by bursting up through to the surface to remind the tradition of what may have been lost or changed. It is the underground stream which nourishes the folklore of Cartomancy.

Many traditional users have found the Mouse/Mice to be a difficult card in any pairing. As a double card it is a loss to one side and a spoiling of things on the other side. If there are negative cards surrounding the Mice then all to the good, or so they say… However, the eroding qualities of the Mouse against the Mountain are very, very slow. The Mice don’t stop the Scythe but they do dull or rust the blade making a bad situation  worse. When paired with the Coffin card the Mice as practice with the daily will show can produce a virus, discomfort or “the runs”.

So what is the control card for the Mice/Mouse in the lenormand deck? For this we leave the traditional and go to the folklore. This is not a beginner’s issue but one of the many tricks in the bag of the card journeyman as they ply their trade. The neutralization of the Mouse card is a bit tricky because it is both deck and direction dependent, one of those pair notations which can’t be written in stone as it must be eye-balled!  It can be either 07-23 or 23-07.*

The Snake eats the Mice. All school children can support this and it is correct that the snake loves to eat rodents. In lenormand method the head of the Serpent card when it touches the Mice/Mouse card neutralizes its effect on the side it touches.

In the photo above the directions are shown from top to bottom of the Piatnik, Dondorf and Mertz decks for the pair Snake eats Mouse.

* In any deck where the Serpent’s head is vertical such as in the Dreaming Way Lenormand the swallowing effect of Serpent in the pairing  cannot be applied to the linear read.