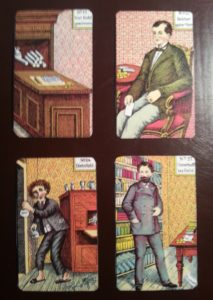 It is simple enough to me, Kipper money cards are the cards which have money on them whether on a table, in a cupboard, a check in the hand or on the floor. The money cards show legal tender and have amounts written on the containers or wrappers which hold the currency.

Two of my German language sources* list Card 13, Rich Young Gent as a Money card saying it primarily represents the firm or company one receives their wages from. Wages are scheduled monies. The Rich Gent can be an accountant or anyone who works with money as a vocation. By extension with card 29, the Prison, it shows a bank employee.

Of course some will ask isn’t Card 13 the Rich Gent a person card? Yes, it is traditionally the card of the son when it appears with other people cards near the Living Room or the House. The assignment of the “other man” or a Lover usually involves other male person cards and not Rich Young Gent. In many Kipper forums, new readers are interpreting romantic involvements in lines where the Rich Young Gent appears when his forte is finance!

The next query may be- why do you list Theft as a money card? Duh… it definitely meets the criteria of having money in denominations on the card face. The scene clearly shows a reduction of funds by the removal of money. The person is not stealing food, jewelry, or someone’s affections. It is money in the thief’s hand.

Card 27 –Unexpected Money is the Merchant’s card. A merchant can’t say how much people spend and when.  Same for a business owner.  This is obviously a money card but it is often explained as money that is not earned as a wage like Card 13. In Card 27 one finds  variance in sales made, commissions, bonuses, winnings; cash which appears when it appears, monies one cannot plan or depend on.

Card 11 Win Lots of Money is accepted as a money card without question. It is a lot of money or a large sum.

However, to every rule there is an exception and here the exception is a female. Card 12- The Rich Young Lady is part of the money card complex by her title even though no money is shown on her card.  She is seen outside in a garden which represents her contact with the social world. In terms of finances she represents disposable income or consumer spending where funds go out of one’s hands.