I absolutely love working with the Kipper deck. My first real challenges in interpretation were the 3 cards which related to the judiciary system- Card 23- Court, Card 29- Prison/Jailhouse, and Card 30 – Court Person. I went to my German texts and started translating to see if I was missing something in the core meaning of the cards and the scenes on them. After a bit of effort I found the approach which works for me. 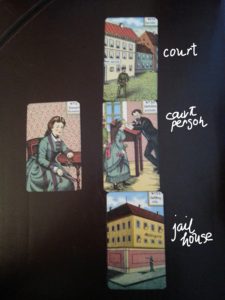 The Court card relates to conflicts and decisions about how to handle them. However, it is specific to pending decisions and conflicts that have not yet been resolved. You have an ongoing conflict with your neighbor and you can’t reach a decision as to how to work it out so you go to court. In a reading the Court card shows your Querent has an unresolved issue.

The Court Person card shows an official person giving advice, discussions and counsel.  The Court Person can in practice be a professional, an expert, or an acquaintance. The words said may not be what one wants to hear or be  said in the way one would like to hear them. As a legal theme it is the “power of the court” to deliver a verdict which resolves a case.

The Prison card relates to blocks and delays.  One has come up against obstacles and restrictions which take TIME. It is slow going, like walking through knee deep mud. In the case of a Querent they are struggling with details/ red tape within a system, an institution or in terms of a personal or professional matter and feel their life/ forward motion has been put on hold. No forward movement or change.

23-30 The Court Card with The Court Person following it can speak of a hearing  or ongoing court trial leading to a descision.

30-23 The Court Person  appearing before the Court Card in a sequence shows  a decision has  been reached or that the Querent has already “made up their mind” on a matter.

The Prison card when not appearing  with the other “legalese” cards 23 and 30 can show a large important building or structure which is locked or guarded. As an example 11-29 can show a bank, while 31-29 can show a hospital or sanitorium.