A simple linear reading moves either left or right of the cards drawn. The single line is the province of fortune tellers. As mentioned previously Tarot divination traditionally used geometric layouts rather than linear ones. Geometric forms like pyramids,  equal arm crosses and stars add dimension by giving height and depth i.e. a below and above and in some layouts provide a diagonal path which gives a fuller view of the situation or the person being divined for. 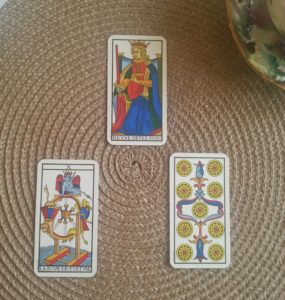 The simple 3 card pyramid layout is great for relationship and comparison reads, as is the hexagram. The 5 card pentagram is a very basic layout and shows the elemental energies present in a situation. 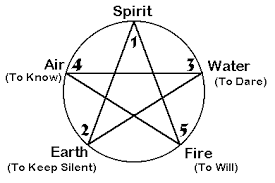 When the cards are considered as energy holders then the energies are activated  by Chaos which is the randomness produced by the shuffle. They then flow into the geometric design their connection to the abstract intact and by way of geometric form reveal a message.

Readers from a Hermetic background often use the Tree of Life as a layout. ToL is a composite diagram which contains the forms of pyramid, cross and diagonal lines. A card is placed in each position of a sephira. 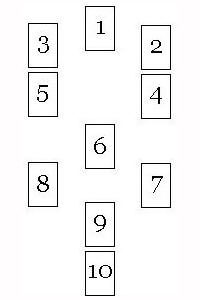 In using the Marseilles Tarot all 78 cards Trumps, Courts and Pips are put into play when using the layouts shown and mentioned here. Each card has a meaning which is modified by its position in the layout.  Do not be deceived. More cards do not necessarily a better reading make. A masterful reader can answer a query in depth with just one Tarot card.