Of course you already know Le Tarot de Marseille (Fr.) is different in structure from a Rider-Waite-Smith deck. It is a different system of Tarot. However like the Rider-Smith-Deck the TdM has variations within its ranks. I use the Jodorowsky & Camoin deck shown below.

This deck is a variation on the deck of Nicolas Conver first printed in 1760. The deck was retooled and printed by Phillipe Camoin the current heir to a family owned Marseilles card printing house and filmmaker and symbologist Alejandro Jodorowsky. Hereafter the letters J-C M will be used to indicate the deck on this blog when posting. 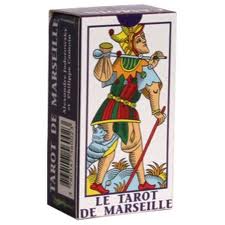 The images of each Marseilles style deck whether by placement, color or object in the Major Arcana and the Court Cards are set according to the deck’s maker. These small changes influence the deck’s environment and thus affect the interpretation. So how do these seemingly minor variations change the way a deck is read?

The eyes of the reader see what is spread before them and in a very real sense the reader “enters” into the world of the symbols they are using. The cards as they are presented constitute the energetic environment of the subconscious level  the reader is traveling through and the symbols are landmarks of that terrain interpreted by the reader’s mind which represent the landscape of the querent be that a client or themselves.

So each deck is an environment or map of a world within a world with the symbols on the cards acting as the legend of the map. Tarot cards function somewhat like the old Dungeons and Dragons game with the playing field being the levels and rooms within the Psyche, or the interface of the subconscious and psychological terrain of the client ( or the reader) as interpreted by the cognitive mind and communicated by language.

This is the reason why Tarot is in esoteric practice called a divination system as it goes “down” into the dark and unseen places – the dungeons of the subconscious to investigate and uncover issues the client is hiding or not dealing with.

Tarot is not a fortune-telling system. Why? A fortune telling system is descriptive in regards to situations or events which have already, are currently or will soon manifest in the light of the mundane world …but believe “what thy wilt”!