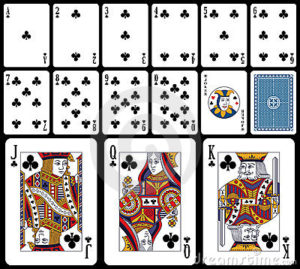 The Clubs are a very physical suit. Some stand alone meanings for the cards in this suit are:

The Ace of Clubs-physical strength, The ability to “make it so.”

The King is the Country Squire.  He is somewhat of a heavy weight being sedentary or retired.   An owner of real estate. Often an employer of many people in a small town.

The Queen is the Lady of the Manor. This Queen who is generally younger than her King rides horses and is not unfamiliar with a hunting rifle.

The Jack of Clubs is the Jock, the Boy of Brawn. Strong and athletic often inclined to bully others less endowed.

2 of clubs can indicate best friends.

3 of clubs is the proverbial “buttinsky” a person who aggressively wants to be included and won’t take NO as an answer.

4 of clubs is a room or a cottage, even a shed.  It can represent the four walls of a dwelling or a fenced in outdoor area.

5 of clubs is traditionally the need to rest or recuperate from exhaustion to literally “lie down”.

6 of clubs is a country road or a lane. It can be the way to one’s work or the method/ way one does their job.

7 of clubs can indicate trouble keeping a steady job and the issues a reduction of wages or  income can bring.

8 of clubs indicates a crew or ones co-workers and can indicate socializing .

9  of clubs  is the end of a job, project  or a contract. It is not like the 7 of clubs where person is removed. Here the work is simply completed.

Stay tuned for:  Reversals in playing cards should you or shouldn’t you?