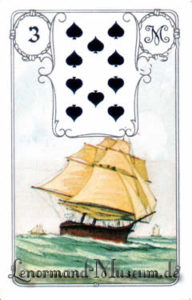 The English language changes. Each generation has its own slang or brings new portmanteau or combinations into the mix. This is what keeps a language vibrant. Some of the new speech changes resemble texting in that they are more akin to shorthand or abbreviations than actual new words.

For example and the reason for this post, Gen Y’s are using the word ship to refer to a relationship! This immediately brought to my mind the lenormand Ship card.

Using the same techniques which keep a verbal language alive, one could use the Ship card in a pairing or visual read such as with the 25-03, Ring-Ship to mean a long-term enduring relationship or with the 18-03, Dog-Ship pair to indicate a life long devotion or following.

In my generation folk used to say any involved or complicated situation was a trip. Social media once had an “it’s complicated” option to describe a relationship. Ha! As they say: “There is nothing new under the sun” and “Everything is connected”.

Just my gloss on Lenormand evolution with a small dash of quantum entanglement.