We have seen the Four Aces and attributed them to the elements and the Hermetic Virtues. They are also the beginning of the numerical cards  or the pips. The Minor Arcana includes the Royals and pips.

The Tree of Life with its 10 sephiroth  in the 4 different Kabalistic worlds gives a graph of the 40 numeric cards. The 16  Court Cards would be representative of the 4 vertical levels on each Tree, i.e.  Atziluth (King) Briah (Queen)  Yetzirah (Knight) to Assiah (Page). 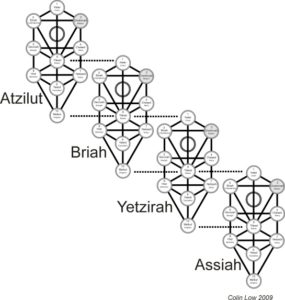 Atziluth relates to the Fire world, Briah the Water world, Yetzirah, the Air world and Assiah the Earth world in terms of elemental energies, density and principles. One can relate suits and their emblems in Tarot and in the standard deck of playing cards as follows:

So the Pips can be visualized as four Trees of Life, each complete and facing in a different direction. When making a  3D model the  four sides of the Tree of Life are joined at the central pillar, i.e. the Ace, 6,  9 and 10. The figure below illustrates a model of this Tree.

The Daath point or the empty circle shown in the first series of figures in this post  can in theory be said to represent a metaphysical or invisible singularity or nexus point occupied by a single Major Arcana card in Tarot, i.e. the numberless card known as The Fool  or the Joker in the standard playing card deck.

The Fool as the Daath point can be considered as an invisible portal which connects all four faces or levels of the 3D tree model in our local space to non-local dimensions, quantum spaces or enfolded realities outside of space time.

The Aces to the fives in any suit are a pentad of invisible energies. The six to nine are a rhombus or diamond of visible effects. The tens are in a sense set apart as places where transition occurs from one state into another.

The pips in Tarot divination are a quantitative representation of external powers, energetic forces or spirits interacting or interfering with the Querent.