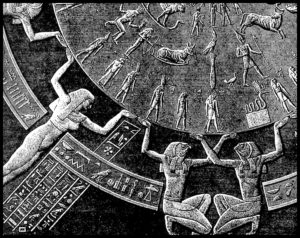 The use of 36 cards in the small Lenormand,  Kipperkarten and  the Zigeuner Wahrsagekarten aka The Gypsy Fortune-Telling Cards alerted me to look into the occult meaning of the number 36 early on in my study of the German school of Cartomancy.

The number 36 can be traced back to the astronomical pictograms of  old cultures. In Astrology each of the twelve 30 degree signs of the Zodiac is divided into 3 sections. Each section of 10 degrees is a decan. 3 times 12 gives us 36 decans.

In the West the information on the Decans is approached mainly through the Egyptians but was most likely shared by all  Old World cultures of star gazers who built high platforms in stone.

To some the Decans were seen as messengers of the Gods to others the Decans were the fingers of the Gods themselves. From this may come the Biblical and proverbial saying ” the handwriting is on the wall”.  In our case as card readers the writing once on the wall of  heavens and representative   of “one’s natal Fate,” is now found on Earth in 36 images laid out on a table!

Of course on the magical side 36 is the number of Spirits or Djinn  spoken of in the Picatrix, an Arabian grimoire eagerly grasped by early European magicians. The  same methods used in the division of  the 360 degree ecliptic by  Astrologers  were used by Adepts who personified  the Decans as intelligent entities who could be held  and questioned within the confines of the Magic Circle.

Is there a connection between the circles of Star groups,  the hierarchy of Djinn and the 36 cards  which make up the most “talkative” oracles of Cartomancy?   I find this topic quite interesting. If you would like to investigate further check out the resources below.

The Picatrix, translation by Warner and Greer, Adocentyn Press, 2011.