It has been a part of my Tarot end-beginning ritual to interpret  the incoming year  in terms of the arcanum or trumps. Here, I am using the mini Thoth deck printed by AG Muller back in 1997. The Thoth Tarot is an old friend and was my introduction to the study of the Tarot as a system versus as a divination aid. 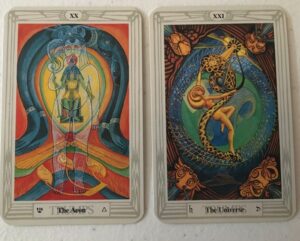 Above is the Tarotic equivalent of the coming year 2021. As we have been dealing with the Judgement / Aeon card for 20 solid years the energy is recognizable. The end of the Age is a transition and the effect is  destructive, and fragmenting. Crowley believed this was the card of the New age of Horus, which is why the child Horus is shown with his finger to his mouth covering his lips which is saying not all can be told- this advice has been received by  all serious metaphysicians since 2000.

Card 21 is The World/Universe and it is the final combination that can be paired with the 20th trump. The pairing says that there is an ending which is superimposed over the entire planet which covers or ushers in the New Age. We are there now.

However there are other messages from Maat/Math in the Tarot Gematria of 2021 which are found in hidden or enclosed combinations. 20-21 hides in the reverse order 12 and 02, i.e. The Hanged Man and the High Priestess. 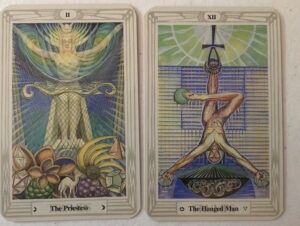 With this deck the blue tones and the shading of these two trumps point to the subtle level of the energy changes. The Hanged Man speaks of sacrifices human and otherwise and it speaks of reversals- of the plane “above” the Earth’s material level.  So like Odin the initiate must make a sacrifice to receive knowledge which AT THIS TIME is being taught or released only on the subtle planes by the High Priestess. The High Priestess is another concept of secrecy as only to those who have made offerings of their time, commitment and devotion- symbolized by the fruits of the  Earth at her feet can enter her temple. 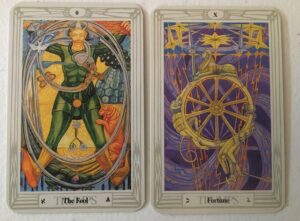 The final combination of 2021 in reverse hides  10& 22(Cipher/Zero). The 22nd card is the unnumbered trump.  The Wheel of Fortune is the symbol of the limit of evolution in the Cosmos. It is the Revolving Door of incarnation or incarceration – conception; birth; maturity;  death which plays over and over- until it doesn’t. 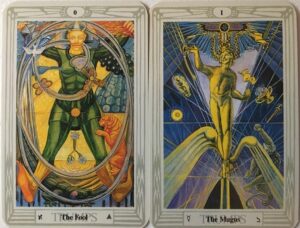 In the forward motion of 20-21 we see 22 & 01,  the Fool and the Magus. Are they adversarial energies or one and the none? Zero is hung over The Fool as a symbol  to remind of us of the Unborn and Infinite  Outside the Cosmic confines. This combination reminds the metaphysician there is an escape hatch as well as a pause button.