Skip to content
The Spirits are saying there is “plenty of hell” for everyone in the coming year. So don’t think 2021 is bringing anything other than Judgment on the World or the physical plane.
What does it mean to take refuge? To take refuge is to find a safe space. Refuge comes from the Old French meaning “to flee.” Refuge in most religions referred to physically entering the protective enclosures of temples or monasteries, off- limits by cultural agreement to war & strife
welcoming to those forced out of their homes.
Some of the great buildings extant from times unknown called by various names today such as Gothic, Moorish or Tartarian architecture were such stone citadels. Refuge has an occult meaning and as such refuge is said to be “under the wings ” or the protection of a powerful Entity. 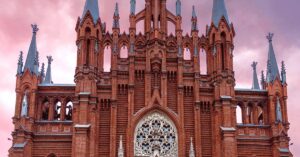 In T: The New Tarot for the Aquarian Age drawn by John Starr Cooke, the numbers are not present on the Major Trumps and all the names have been changed.  The old Blasted Tower or 16th Trump became Citadel, the conceptual equivalent of refuge or sanctuary in the modified deck.
As to the date 2021, in Cooke’s deck card 20 is  Judgement renamed the Knower of which we just had a double dose in 2020!  Card 21,  the World is dubbed The Virgin. This combination of 2021, i.e. Knower with Virgin suggests that there will changes or structural shifts in the third dimension.