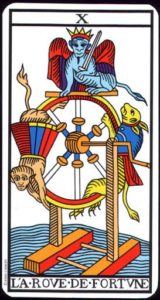 The tenth card of the Major Arcana is the Wheel of Fortune. The Wheel is sometimes identified with the Wheel of the Year.  In different cultures the concept of a New Year meant  different things and began at different times of the year.

In agricultural or rural areas after the Harvest was  in and the land cleared, the old growing season was over and a new season begun with Mother  Earth getting a well deserved nap under a soon to be snow covered blanket.

For some, the New Year began on November 1st, an old World Cross-Quarter Day.  From All Hallows Eve, through All Soul’s Day on November 2nd was seen as the transition to a clean slate, and all debts had to be settled by then.

The larders were full, the hunting season was underway with meats being skinned, butchered and hung. Sausages were being made as well as cheeses and mead.  The advent of Winter in the Northern Hemisphere was the time to begin the more creative and decorative arts-  spinning, weaving, sewing, tanning hides,  woodturning and carving.  It was a time to teach the babes and with early dark to listen to tales told  by Elders which went on for nights at a time like installments of a soap opera.

The Wheel of Fortune can represent samsara in a Buddhist world view. It is a symbol linked visually to the  face of a clock.   It shows time changing as it did last night from summer to standard time. The Wheel of Fortune  also shows the stages of  human life and of Mother Nature.  Round and round we go, to grow and prune,  to turn and  change, as Time blinks its  Sun and Moon eyes.