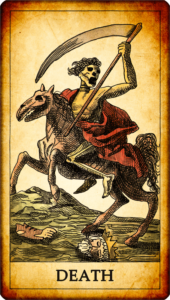 Most people see October as the beginning of the Season of the Witch, this is a modern trend in a time when Witches are a bit more tolerated than in the past. However, in Agro-cults this month is the Season of the Reaper. It is Harvest. The whole of Nature ( in places where there are four seasons ) is changing her clothes.

The Tarot card image on the left picks up some of the colors I see in mid- October in the beautiful Hudson Valley of  Upstate New York . The Hudson Valley was  home to the  Mahican/ Mohican and the Wappinger tribes. Fall was their time to hunt.

Traditionally,  the Death card in Marseilles Tarot carries no title but only the number 13 usually in the Roman form of XIII just as the Fool card is a cipher which shows no number only its title.

Many modern folk want to mitigate the meaning of Death. Death is death. His tool, the Scythe is the same instrument farmers use to clear their fields at Harvest, only Death clears the ranks of men. Ripeness of his fruit is not  determined by age, but Death is death.

It is a withering which announces Death’s approach which like “age” may not always be seen on the flesh but is more an unraveling. Death’s scythe can strike the hail and hearty as accident, the old and frail as evident, but Death is death.

Death is a permanent ending to a situation, person or thing. It cannot be revived. It is over and done once the Scythe has been swung. Death has to be accepted. It may take some time as one may cling as the last autumn leaves on the trees before first snow, but Death is death.

The concepts of what happens after Death is not the point of October harvest but is to be found in the pantry of November remembering.