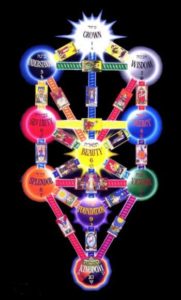 Many groups and lodges have used the Major Arcana to hold teachings and mark ranks. The Tarot reader on the corner who has not studied any esoteric philosophies nor participated in schools of ceremonial magic will not  know anything about this aspect of Tarot.

Crowley, Mathers, W.E. Butler and many other occultists have left records on the use of the Tarot in ritual but most of these papers do not spend time  speaking about divination but focus on symbolic applications and correspondences.

The Major Arcana  cards themselves can be seen as 22 scenarios or cliches which the student can “enter” via pathworking or journeying techniques according to their degree in order to  increase their knowledge of the astral plane.

The use of the Tarot in this way is but another application of  Hermetic practices in which the Tree of Life is center stage  and  the Tarot is used to denote  paths on the Tree.