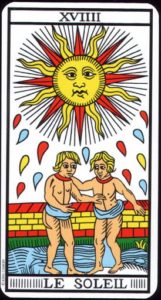 Statement:  The Work is the demolition of the Wall of Fiction the disciple’s  “Mind-Body” finds Itself trapped in.

When one approaches  Tarot not as a divination device but as the Book of Life’s alchemic notations the Marseille deck’s Major Arcana images reveal the greatest amount of symbolic details towards that purpose.

The Twins in card 19 shown in the walled in garden show the Mind-Body relationship. The child with the tail is of course the physical body which shares much with the animal kingdom.

The Wall around the Twins is the Wall of Fiction or the accepted Reality of Phenomena which has to be demolished.  It is the symbol of  liminal space the time between  ‘what was’ and what comes  ‘next.’ It represents transition, waiting, and limitation. It may seem a defined space is Paradise or  a  Garden of Eden but in fact it is a holding cell for both  mind and body.

The shining  Sun shows the Group Mind as an observer and  energy source. The Sun is not confined inside the Garden but shines over a  greater space than the walled  enclosure.

In order for a student to  become an initiate they must destroy their wall. This is a process of work and understanding of their own mental and psychological fictions. A search for beliefs or the seeds which took root and in a sense created each brick or obstacle which  limits their potential or greater awareness.

The word “alchemate”  is a portmanteau which showed up around 2016 which combines the words “alchemy” to transform and the word “automate” which means to make processes and systems automatic.

An initiate  begins or turns on the process of transformation in the limited consciousness of the DAY cycle using  affirmations, visualizations and/or energy moving  exercises which when faithfully done penetrates to the deeper levels of the subconscious to become automatic in the NIGHT cycle which is show in card 20 or   Judgement. 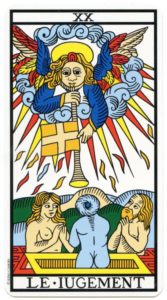 The combination of cards 19 and 20 shows the work of the Day and Night Cycle or the process of  alchemating!

The Sun as in Card 20 has transformed from the Group Mind of the masses to the Anima Mundi or Soul of the Earth (equilateral cross on yellow flag is an earth symbol) who blows a  trumpet.  One can see vestiges of the Twins in a male and female pair who represent here the conscious and subconscious aspects of human awareness .  A mysterious central grey-blue figure rises up  from a prone position in a coffin or bed,  facing the Anima Sola and the revelation  of a new heaven and Earth with no wall in sight.