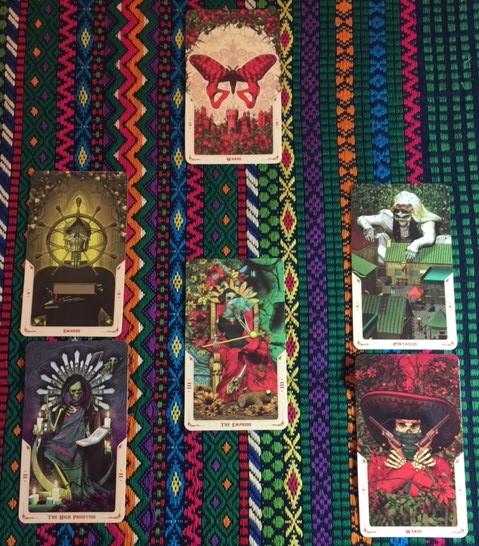 The Santa Muerte Tarot finally arrived from Book Depository in the UK who as always has the best prices! This 2017 Lo Scarabeo deck was drawn by Fabio Listrani.

It came in the standard box which is quite sturdy. The cards are glossy  and the stock makes it easy to shuffle them. The colors are vibrant and the scenes are not quite RWS in format.

There is not a one on one correspondence to basic Tarot meanings. As a “concept” deck the subject matter “flavors” the brew so to speak. Therefore the action on the cardface is important not a rote response. The LWB gives a short blurb called Advice of the Dead for each card. It would help to look at each card as you read the notation  when working with the deck. It is not for those new to Tarot, no concept deck is.

The first layout done with the deck was a Pentagram Spread to inquire about the deck itself. This is shown in the first photo.  The first card was the 10 of Wands which is a red butterfly.

The butterfly is the form taken by women warriors in the Toltec-Aztec culture. They are of course women who die in childbirth and in battle who transform in Spirit and do not enter into Mictlan or the Underworld.  The artist has drawn the butterfly wings of the 10’s in this deck as stylized sternums or breastbones,i.e.  the bones which protect the heart.  Male warriors return as hummingbirds. The concept of to “die in battle”  or “warfare” can be extended in modern times to those who die a violent death.

The colors and the directions are key factors in the  Aztec codes used to map the world. There is some variation from Olmec to Mayan to Toltec to Aztec to Mexica  but in this deck it appears that Red is the color of the West/Wands;  Yellow the color of the East/Sword;  Blue the color of the South/Cups. The traditional color of the North or Mictlan is white but since the Land of the Dead  is where the scenes take place Green/Pentacles becomes the Earth above, the land of the living which is engaged in a reciprocal relationship with the dead. 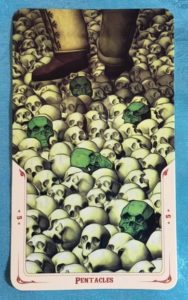 Bones are seeds in the Aztec Underworld. After the creation of the Fifth Sun the cosmovision of Mesoamerica says bones were required to repopulate the Earth with human beings. The bones taken from Mictlan were then fed the blood of the Gods in order to bring them and mankind back to fleshy life.

In light of this one can see why the phrase “Memento Vivere” or  remember to live appears over the Sugar Skull on the deck box.  Just as  trees, vegetation and  flowers  come from seeds so does mankind come from seeds of bone.

The High Priestess card connects to one’s dream life. As the scenario shows she  has a key to their understanding. In fact she may have a hand in creating them. Her open book has drawings in it like the Codices of the Aztecs not words. A codex is shown again closed  in the 6 of Wands also in my Pentagram Spread.

The High Priestess  is one of the few cards  in the deck with lit candles. The Magician, Hierophant have candles as does The Queen of Wands. The Hermit of course took his lit lamp with him into the grave.  The Five of Wands shows a lit match with an empty candle holder. All of these candle/light cards are part of a larger story of the absence or presence of light as awareness in the dream and death worlds.

So we see a slice of “activity” in the Land of the Dead, a land both North and below our feet. Do not place  westernized limits on when to use  this deck. It is not just for Halloween or the Days of the Dead. Everyday the two worlds of the Living and the Dead intersect  with each death and birth; with every sunrise and sunset.

Working with your Ancestors is not a requirement for this deck. The Dead are the dead. They are simply people who have passed on- not just your kin but every dead man and dead woman. They are not Spirits as the Spirit of a dead man having wings  flies away and cannot be confined in the Land of the Dead .