It is fairly easy to read the symbols on the Major Arcana in terms of their placement on the card. There is above and below, left and right and center and there is also the corners of the cards which the eye uses to focus and confine the images inside a border or boundary. 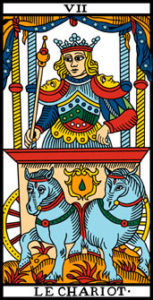 The way the images face and what direction they look towards is another layer of symmetry or pattern formation. As an example in the Chariot card all eyes are directed towards the left- both the eyes of the Driver above and the eyes of the horses below in the image. The Camoin-Jodorowsky deck shows a red center line which divides the card in half marking  the space of  firmament /stars and foundation/ soil and plant life- the celestial and terrestrial realms .

In the Devil card shown below the center of the card is marked by curved lines. Between the red curves is  a face on the stomac

h of a Devil  standing on a raised spherical platform. The world “above”  the center is marked by wings and overt breasts while the world below shows  male genitalia, eyed knees and two chained minions. The symmetry is present but the location is not the same as is shown on the Chariot card. There is white sky and water behind the figures and the minions do not stand on red soil but on black land.

In order to understand  Major Arcana scenarios the reader  has to juxtaposition sides, tops, bottoms and corners to ascertain the location in which energy is held. To see where energy  is being directed one looks at the eyes of the dominate/larger or central figure on the card face. 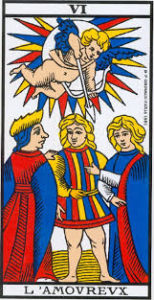 Another element in evaluation of the Major Arcana  is color and shading. In the Chariot and the Devil cards above we see the light blue skin tone is used to denote a non-human and an animal figure. In the Lovers the contrast of blue, red and yellow as bold colors adds “temperature”.  The red color can show us what is hot or active; blue what is  cool or inactive and the yellow what is neutral or not yet fully engaged, i.e. undecided.

The coloring and geometric placement of symbols dominates the Major Arcana just as the numeric  code is the power element in the pips of the Minor Arcana.

The use of keywords for the Tarot Trumps does not allow a reader the agility required to flow into the narrative and tell the tale. Keywords like borders on cards isolate and short-circuit the energies released in a layout.

In order to use the Major Arcana, a reader must announce the Game as it is being played, to read the cards as maps of current plays and moves made by  the teams /generations engaged with the world today. Time changes things and meanings…