It is the 21st century and John Starr Cooke’s  Aquarian Tarot was created for this time. It was an offering channeled through a makeshift Ouija Board using a silver dollar planchette via a group of star entities who happened to be around circa 1966 just as the heavens were starting to rearrange themselves.  This Tarot has been called the Reverse Tarot and nicknamed the Hippie Tarot by some, though The Motherpeace Tarot really is the true holder of that title.

The Aquarian Tarot was and is a famous  Tarot deck as was its artist John Starr Cooke the man behind the San Francisco Be-In and the Haight Ashbury hippie scene.

Many influences went into the deck some obvious others not. One major influence of Cooke on the Books or Trumps themselves is the art and culture of the Mexican landscape where Cooke lived off and on. His subconscious used symbology  from the Aztec-Mexica paradigm  to illustrate the instructions of the Spirits he and his circle channeled. 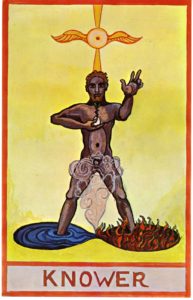 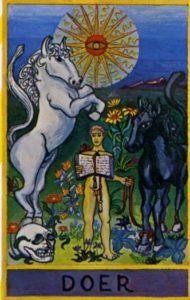 The Knower is the Old Judgement card, the date of the current millenium or 20. The Doer card is the Old Sun card which occupied the 19th position in the Old Order of the deck.  2019 will yield new knowledge about our Sun or rather we shall learn more about what the Sun is doing.

One can use the 20-19 trump pair as: an insight into “global warming;” an indicator of increased sunspots and/or solar instability; or a predictor of a new superweapon which destroys by fire.