There is first a need to define the concepts as used in this post. For the purpose of Divination wii define Spirit as a sentient energy meaning  a form of awareness. Spirit can therefore be seen to be present on all planes. This definition sets it apart from the concept of a deity.

The Spirits in a Deck

Many people “name” Spirits; thus Spirits are called by their names using sound and/or images because as  intelligent entities they can respond and engage in communication with a 3 plane entity or human being.

Within any deck there are certain cards which can by their symbology work as a mnemonic for a certain Spirit or energy. These linking cards are the Spirits in a Deck discussed in the folklore of Cartomancy. Wii think of the cards in a deck as “ calling cards”.  The cards are not Spirits themselves but act as a link to a Spirit.

When cards are flagged by a Reader as being important, wii say they are the result of  her or him having “guidance”. This means the sentient  energy “announced itself” to the Reader  either indirectly or directly. What is the process of a direct introduction? Good question!  One can say  it is when a certain card appears either over and over, or in  combination echoes as a pair, triple  or cluster which repeats with variations.  This is the  energy  reaching out or trying to get the Reader’s attention as they work with their cards. Then the Reader addresses the combination as such and such-  giving  an abstract energetic principle or natural law a “name” as a concrete condition.

The Spirit of the Deck

For example, The Tarot as a divination device is twin spirited  while playing cards and oracle decks generally have a solitary driver. So in an oracle deck  usually  there is one card which represents or “speaks” for the entire deck.  Knowing which card it is is found by the three methods mentioned above. When known the Voice of the Oracle card, the cards around it and where it appears in a layout are noted for it gives a summation message for the entire reading.

So there are at least three ways to approach the Spirit of and the Spirits in a deck. One is via tradition or the folklore, or by the report of Readers who have walked this road before you. Another method is by the intercession of the collective Spirit of the deck which is much like having a formal introduction and thirdly – the direct method which is  the consequence of working with a deck closely for a period of time .

Thus divination is about named formulae  only instead of naked numbers as in Mathematics one  works with Mythemes or fragments of archetypal memory as shown in scenarios on the cardface or by an assemblage of  two dimensional symbol codes or emblems plucked out of a quantum field and placed  in a pattern by a Reader with the intention  they  communicate or “speak”.

“The symbols which live in your internal reality do not stand for external things, they are your internal manifestations of those outer things” ~  Robert  Svoboda

The comment above is the subject of this post which is  generic in that it  can be applied to any deck’s  symbology or coding. First off the quote says  “equates to” or the concept of being ” the same as ” cannot be used in terms of symbols.

Symbols point to something but they are not the something which they  point to!  This has been said in many ways over human history  such as  “The map is not the territory.” Written words and images are 2 dimensional. A picture of a tree is obviously not the same as a living tree, neither is a film image or even a 3D projection of a holograph.

Human awareness  goes to and fro  between the outer realm of external forms and their inner psycho-mental  ideation  by way of symbols. Man as a sentient being  can straddle the gap between the two  worlds.

However, between symbolic representation and the thing itself; the  two distinct ways of human knowing there is a gap. One can think of it as a window dividing  inner from outer.  Under this window is a  deep  trench or ditch which is the gateway to another dimension- the home of the Other. 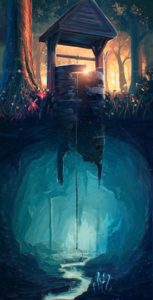 The Other swims in a sea of free energies and does not  interact or communicate with human beings by the use of symbols.  The Other  is aware of humanity and illustrates and orchestrates Its interest by use of a completely different method.

The sentient dweller below the threshold of human awareness has the ability to shape formless energies into sets of circumstances and hurl them into Existence like so many thunderbolts. Its messages are anomalous events, synchronicities and serialized phenomena which mankind calls  The Uncanny. To be caught up in such an odd energy loop creates a fear response which is visceral. It can and does drive men mad.

The vignettes on  the faces of fortune telling cards which depict scenes are regarded by some readers as  mnemonic devices,  reminders of events which were  cast into Existence by The Other in the very distant past.

See the non-fiction writings of:

Paul Kammerer – The Law of Series

and the Opera Omnia of  fiction writers H.P. Lovecraft and Clive Barker.