In dealing with the Coffin card Lenormand differs from its baby sister Kipper and its Gypsy cousin.  Since most encounter the Coffin in a line this is a good way to start the investigation. The Coffin is either an ending or a state of illness. 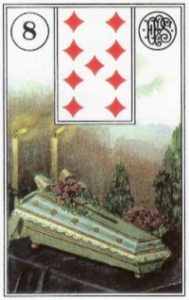 In my Master Deck, the Blue Owl, The Coffin is actually a raised monument and represents a memorial to an ending. In order to  pair with the image, I use the left side where a knob is slightly protruding as the Head or the grief stage and the right side would be the acceptance of the ending.

When reading long lines such as a Line of Nine or the Grand Tableau, the direction faced by the Significator which they move towards comes to a full stop whenever they encounter the Coffin card. The cards on the other side of the Coffin do not pertain to their situation at all.

The Coffin as illness  is detailed in a health reading layout. Health is NOT read by readers in the US. In Europe and Brazil experienced readers use lenormand cards which have body part and illness codes, to investigate the physical, psychological and spiritual nature of diseases.