As time goes on, wii  find birthdays to be nostalgic, so to cheer up a purchase was made of a long eyed Oracle deck as a present to self. The Jade oracle arrived from the West Coast a few days later and being in good spirits I opened the box and was delighted by the presentation. 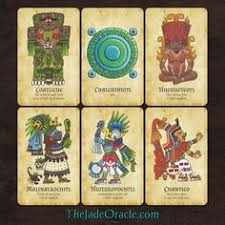 The box is sturdy. It contains 52 large full color cards. It arrived from Goddess Ink with a large silky drawstring pouch and the LWB written in English and Spanish to tell the stories of the deities and symbols of ancient Mexico .

This is a woman-centric enterprise. The 3 ladies responsible for the deck’s creation did their job well. Female deities who were maligned by Spanish Catholic writers of the ancient Codices which preserved their names and images are returned to their Divine status and given the respect they are due! The LWB though brief for each of the 52 cards works hard to explain the function of each deity or symbol breaking down the name meanings in Nahuatl, the indigenous language of Central Mexico.

The LWB gives enough meaning  to use a single card draw for any simple clear query and there is a Five Card Reading which provides a 360 degree  view of the Querent  in time and space using the Aztec-Mexica cultural interpretation of the four directions.

I enjoyed using the 5 card layout on New Year’s Day as a part of divination rituals. It is an oracle for those who feel the call of the Earth beneath them in the Americas and feel the changes being created by the coming Sixth Sun.

Images shown are the property of Goddess Ink. Deck was created by Veronica Iglesias and Anne Key, Art by Ramona Snow Teo in 2017 by a Kickstarter campaign. It is now available in a coloring card edition to be filled in by the user. For more information see: