The two cards shown below are often referred to as directional (14) and connecting (31) cards. In practice with the core Kipper read where the MC1 or MC2 is the center point of a four card read, cards 14 and 31  function differently in proximity, i.e. touching the MC card.

My daily reads use the 5 card spread which is the base of the STOP CARD METHOD (see bottom picture).  When these  cards 31 & 14 fall in them the meaning is either ILLNESS (31) or PAIN(14). In essence the two cards are read the same way  when they appear in the spread above, below, before and behind the  Main Person card. 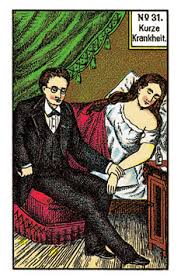 The designations eliminate the need to change the meaning according to the way the MC faces. For example below the MC, the pain is well below the waist, behind  it indicates  back  pain.

In front of the MC is a coming stomach ache and over the head is a current headache or migraine. With Card 31 the pain is temporary, a short illness which requires bed rest. The condition should be diagnosed by a physician and may require medication. When Card  14 is involved with the MC however it indicate a chronic already known condition which is aggravated or acute. Card 14 can indicate tears being shed because of the pain.

The meanings for pain are found in the standard Kipper-Karten Band II by Leiding. I  experience them as having these particular meaning only when making  contact with the MC card in the basic spread below. Other Kipper interpretations or cards 14 and 31 are general or based on the specific spread used. 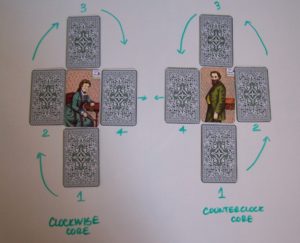