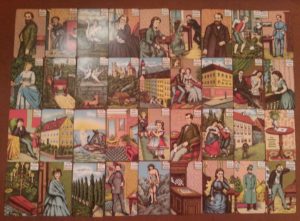 The Große Tafel is the German way of saying a GT or a full layout. Unlike the other 36 card systems, the traditional Bavarian Kipperkarten  GT is only done in a 9 X 4 format. Though when reading for personal issues wii prefer the smaller stop card reading they too can often blossom out when using directional cards to include almost the full deck as well.

The most important question to establish  by asking the  client is their partnership status. This is MC1 -male or MC2 female. There are no options in this system. Choose the Querent’s card and automatically the other MC card is their spouse/partner/ lover. One must know if the person is single, living with someone or if they are legally married, together or separated even if the reading is to focus on matters other than relationship. Once you establish the major players and their “positions” in the Querent’s life, the status or the  roster of the People cards can be clarified. Only then can you read the interplay of the people in your Querent’s life.

When reading for clients  wii do not ask for a “theme” or a single major topic  but for all the issues that  concern the client at the moment. Usually there will be  more than 1 area.The most common problems are WORK and RELATIONSHIPS.  Often there are Querents whose inquiry is an  issue with working or professional  relationships. Kipperkarten, however does not specify health issues as does its older sibling the Lenormand system, or  better said wii did not have access to health correspondents in our training or research materials.

The 36 spread full monty will expose  the issues around your Querent when one follows the steps in reading. Issues are identified by Significator cards, an archaic card reading term wii call “situation cards”.

Since all the cards are there on the board you look for situations, people and relationships. The predominant energy or theme will be shown in the dynamics of the energy, the directions and movements on the board near the MC. After reading the cards as wii see them, it is time for feedback from the client. During feedback if there are issues to be clarified – have at it!

Note with Kipper the same cards can be used in more than one situation and with more than a single significator or Person card inside the borders of the same spread.  There is no need to do another layout. This is what makes the Kipper große tafel the best option for doing client readings.

It will take at least an hour to go over the Kipper GT  with your client. More time if the feedback is extensive and more questions are looked at. However, a reading should not exceed one  hour & a quarter at your given rate.

Wii lay  out the cards before speaking to any  client on the phone.  The people cards are established because wii have already inquired about their status- single, married, divorced, widowed. Again, be very specific on this point as it sets the tone of the reading.

Looking at the cards in the 9 X 4, wii make note of the major points-  namely, the MC’s position in the column and rows*. The circle around the MC., the MC’s House position, the Line  of Sight, then the major situations- taking into account  their placement in the  houses and also the positions of all CRISIS or NEGATIVE cards in relation to the MC.  Then look to their chief concerns.

The Original Kipper cards shown above contain all the  codes, directions and symbols on the card face  to help you help your client. Accept NO substitute deck  if you really want to read in the Kipperkarten system.