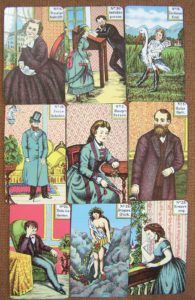 The Original Kippers as shown here, at first struck me as quite old-fashioned and frumpish. I had a hard time getting my eyes to focus on the scenarios.  I put the cards away for a while and took a look at the Mystical Kippers a different style of Kipper deck. Coming back for a second pass with the originals I was reminded of the old style comics in the funny papers. This gave me a renewed interest in the artwork and  allowed me to see each 3X3 reading like a page in a graphic novel. Applying this approach was how I stuck around long enough to learn the directional aspects of the cards.

In my second phase I removed the  white borders on the cards which was akin to taking down a  wall between rooms in a small house to open up the space and allow the energy to flow freely through it. In this way the dynamics of the Kipper deck came alive like the storyboard of a screenplay or movie!

The Kipper narrative in my favorite “Stop Card Method” is indeed a fun read. Regardless of the dated apparel and furnishings or perhaps even because of them  these cards can tell the age old and modern stories of mankind’s folly. I highly recommend the Kipper deck but not for the Grand Tableau read. The beauty of the Original Kippers I have found, is in the smaller layouts. However, the Stop Card spread can take on a “largess” which rivals any GT on occasion.

Kipperkarten  energy is not “like” the Lenormand deck even though they are both German in origin and have 36 cards. The Bavarian born Kippers are utterly and uniquely themselves.  They have a blunt but playful punning both visual and language based to their presentation of truth. In working with them one will come to see the attributes of clothing, furniture, and hairstyles as props in the interior rooms and  backdrops in the exterior scenes which adds a particular charm-  lost when changing or updating the original Kipper deck.

Remember: Each variation  or themed deck is a different world within the world of the original.