A  package from France arrived. It was not a long wait and the red box was intact. However the bonus Tarot de Paris with it arrived without the cellophane on it and missing a title card. Of course I will not be sending it back to Sivilixi Editions … but I was a bit disappointed.

The cards are for study and  historical  value.  They are  beautifully made  though  after  seeing  the  coloring of  modern decks  a bit dull.  I glanced through the book by Patrick Coq and was delighted with the content. As soon as  we all get acquainted  and the deck is opened up, I will post a more detailed review.

Here is the Fool from the Jacques Vieville deck circa 1650.  It follows an anonymous Tarot of Paris of unknown date which also faces left.  What is important to notice is that there is NO NUMBER on the card as well as the direction the Fool faces. In the Vieville decks the majors bear no titles and the numbering is different than the Marseilles, which is different than the modern RWS Tarot.

The first acknowledged Marseille deck is the Jean Noblet  of 1659. The Florney edition  does a modern revisioning of the original Vieville deck and goes one step further by presenting 44 cards with a reversed card in the all majors edition turned to “match”  Marseille style decks.

Since the Vieville is older,  and faces left  wii see this style of card as a remnant of an earlier Gnosis now forgotten. Left to us means  the Fool is making an exit from space time.

The right facing Fool as shown in the Marseille style editions wii interpret as the Fool entering  and/or  re-entering the labyrinth of the Cosmos as  tabula rasa to walk  its circular path of sequential eternal return.

Remember that the Zero or Cipher is a modern addition to this card.  Also the Tarot de Vieville  is a unique style of Tarot, just as is the Marseille deck.  Below is the all majors double version produced by Editions Le Tarot  drawn by the late J.C. Florney.

Solstice means “Sun stands still.” Because the earth’s axis of rotation was tilted 23 ½ degrees to its orbit around the sun, the sun appears to move north and south during the year causing the seasons to change. Thousands of years ago the sun was in the constellation Cancer at summer solstice in June and in the constellation Capricornus at midwinter’s night or the winter solstice in December.

But not anymore. The Gregorian calendar is long overdue for  replacement.  The precession of the equinoxes describes the movement of  the zodiac signs on the ecliptic  1 degree every 72 years.  Now the summer solstice occurs in Gemini and the winter solstice is in Sagittarius. The Virgin card shown above from T: The New Tarot by John Starr Cooke is the equivalent of the World card in traditional Tarot. Cooke shows the current placement of the Equinoxes and Solstices in the Mutable zodiac signs of Gemini, Sagittarius, Virgo and Pisces using a new notation. While Gemini and Sagittarius are  straightforward  Virgo is the apple and the inverted cup is Pisces in his corner stations.
The starting dates of traditional zodiac signs (plus one) on the ecliptic are now different:
Sagittarius: Dec. 18 to Jan. 20
Capricorn: Jan. 21 to Feb. 16
Aquarius: Feb. 17 to March 11
Pisces: March 12 to April 18
Aries: April 19 to May 13
Taurus: May 14 to June 21
Gemini: June 22 to July 20
Cancer: July 21 to Aug. 10
Leo: Aug. 11 to Sept. 16
Virgo: Sept. 17 to Oct. 30
Libra: Oct. 31 to Nov. 23
Scorpio: Nov. 24 to Nov. 29
Ophiuchus: Nov. 30 to Dec. 17

Etymology is the mind’s game. The roots of words are effects not the cause of meaning. Language is symbol based and culturally biased.  Words are tricky, the banana peels man’s intellect tosses away and later slips on, and the academic labyrinth  it fashions only to get trapped in.

Words cannot explain what is found above the mental plane, i.e.  free energy.  The mental plane in modern occult terminology is called causal. This is an error.

It is consciousness not cognitive brain function which is the Sole Cause.  The primordial emanations which predate existence  are vibratory, thus  deep study in Hermetic Arts requires one convert words into numbers or frequencies.

Revelation renders mankind  outside of his fleshly form  whether in the  dream body or energy double “dumbstruck.”  Above the mental plane  pictures and image streams are transferred in lieu of words. The words come later and the meaning, if it is to be had at all, must be wrested from  ones life experience.

Tarot as used in Hermeticism focuses on the Major Arcana as notarikon. The  descriptions of states and conditions  on the card’s face is approached as having another interpretation which goes beyond the images shown. Each trump is an Arcana, the holder of a secret or as they say in the  East a “terma” or concealed  treasure.

*The word “notarikon” is borrowed  Greek language  which was derived from the  Latin word “notarius” meaning “shorthand writer.” Notarikon is one of  three  methods used by Kabbalists, the other two are Gematria and Temurah to rearrange words and sentences. These methods were used in order to derive and to hide the esoteric substratum and deeper spiritual meaning of the words in the sacred texts.  Notarikon was used in  Alchemy. 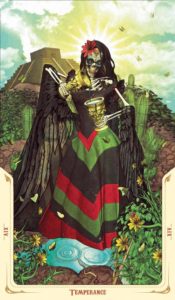 Waiting for the arrival of a new deck is a practice which develops one’s patience. Ha! I am in the process of doing some looking into a Tarot deck based on an indigenous American folkloric tradition, albeit a modern one. I ordered the 2017 Santa Muerte Tarot deck standard edition by Fabio Listrani. It will be my next blog review.

The card that first caught my attention is the one pictured at the left, Temperance. Just one look and  I was off searching for the other images of the deck. The minors have some scenes which adhere to the Rider-Waite format, while others show  images based on the theme of the deck.

Not being involved in the cult of Santa Muerte, the upcoming review will focus on how indigenous American cultural symbology  works in divination. 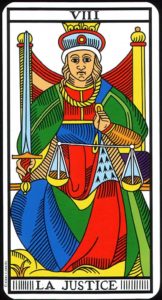 The perfect card for the Fall Equinox for me is the eighth card in Le Tarot de Marseilles or Justice.  The scales and the sword evoke  a feeling of leaves falling in the Northern Hemisphere and the descent into colder weather as shown by the ermine triangle in Lady Justice’s robe. In the Camoin-Jodorowsky Tarot, Justice is forward facing and wears no veil. She is an observer.

Most Tarot readers forget the different numerical order in the Marseille styled decks. The number 8 is the same figure as the leminscate when turned on its side. It reminds one of eternity or  the eternal return. It is a looped ribbon. Most switch the words eternal and infinite but they are quite different in concept. What is infinite is stretched out endlessly, or without end. What is eternal is enduring as it is repeated over and over. It is phenomena which can be seen, evaluated and weighed on Justice’s scale. What is eternal has a beginning and an ending point which the sword reminds us of in the right hand of the central figure.

More modern minds might see an eternal return as a feedback loop, with a beginning midpoint, and ending; which then rewinds to start over again. “Turn and return”.  The cycle of birth, death and rebirth may have emerged from Northern agro-cults as they observed the life of trees, crops and seasons. 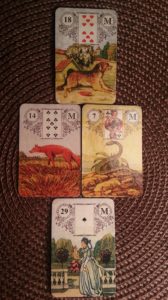