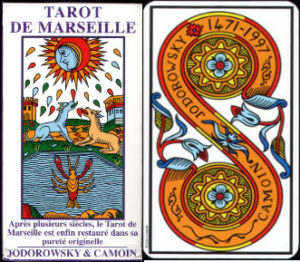 In a time where one may casually hear any means of divination referred to as Tarot, which type of deck a full size 78 card  true Tarot or an oracle deck of various sizes from less than 36 to more than 52 cards is the best to select for your client’s reading situation?

Having started out with a full sized Tarot deck of the Marseilles style where the minor arcana or pip cards are numbered this deck is the one which is most familiar to me. 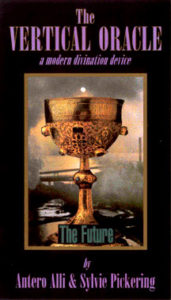 An oracle deck for me is a deck which is visual having pictures and geometric symbols  not numbered or in suits like playing cards. This style of deck works for me to trigger  messages from the shared  subconscious levels between myself and the client.  Most oracle decks were not numbered individually and the number of cards in the deck varied.  A personal favorite was the 1997 Vertical Oracle by Antero Alli using 52 images created by Sylvie Pickering.

In the last 10 years learning the European style of fortune telling decks of 36 cards was a major change and challenge. Having started with Lenormand from a French perspective study proved in was indeed a German concept. Moving into the Kipperkarten the benefits of using the 36 cards began to show themselves in ways that Tarot did not. 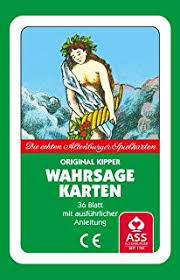 Tarot I have found reads the internal aspects of the person in their environment  or inside to outside.  Oracle decks read all the energies  in an environment or situation using symbol language.   Fortune telling decks of 36 cards seem to deal with the energies in the outer world and how the  person is handling them or from the outer to the inner.

Clients in general want to deal with the latter how to handle the outer environment wanting to know what is coming down the pike. The 36  card decks excel at this. So it would be good when you don’t know the client at all such as an outdoor fair or doing online services.

Initiates and people working in aspects of magick or  the occult want to check their energies and balance so the 78 card Tarot is able to show them an internal blueprint. The Major Arcana dealing with outer phenomena,  the Minor Arcana with the 4 element balance in their own system and the Court Cards with their psychological interface.  One would have to know the client’s interests to select this method.

Artists, creative people and those of a mystical mindset fare well when read with  a symbol-visual dominant oracle. Again this works for people whose interests you know or repeat clients.

Just my take on the various tools. Try them out!