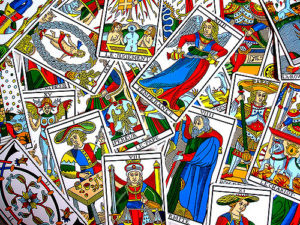 The Major Arcana have been used in the Western system of Hermetics along with the Tree of Life to hold the contents and illustrate the structure of the Worlds.  The roots of Tarot like the roots of all games have an enduring and far reaching quality which allows them to survive in the eye of the public and thus by availability to also be used as aids to memory.

The reading of events to come in Tarot relies heavily on the 40 Minor Arcana as the 16 Court Cards interact with them. These 56 cards relate  to energies which are coalescing and forming into manifestation. The 22 cards can be seen as archetypes, causes or knots being tied and untied which impact upon coming events.

The 52 standard playing card deck is a modification of the 56 cards of Tarot’s  Minor Arcana which can be used for fortune telling.  The requirement to do so is a firm understanding of the 4 emblems or suits as symbols of the elements and/or the ability to read elemental pairings in a numerical field.

I see Tarot as a divination tool best suited to the Initiate in a system.   A divination tool reads the Querent’s energies as the central  catalyst of all phenomena in the environment.  For the everyday mundane “other” and outer centered queries of love and money, the 36 card decks give a far more direct response.

The German 36 card games are great parlor oracles. They work well to answer all the questions a client may ask. Lenormand is quite popular in the US today. My preference however  is the  original Kipperkarten deck with its variety of layouts and sharp directness.  As to the Gypsy cards I do not particularly care for the images on the cards and thus there is no sympathetic bond.  A reader should definitely have an affinity for the cards they read!

It is not necessary to read a variety of decks. One may of course sample many decks over time in search of what works best but when it comes to advancing in Cartomancy  one will find they have to limit their toolkit. The master deck is a single type of deck in a specific form which rises up out of the multitude of cards. As the saying goes “there can be only one”  which the Reader truly knows inside and out.