The Self that can be known is Numberless having infinite variations.

The Self that cannot be known is Nameless and unique.

The Major Trumps of a traditional Marseilles style deck will illustrate which Self is activated. 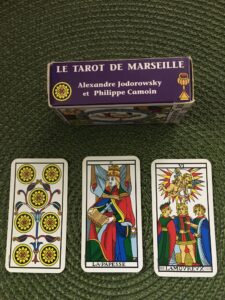 Often Wii look at the draws of other readers to see what they have to say about the cards. One thing that astonishes is that in linear reads people read the card symbols in the same direction as text in their native language. Wrong! One should read in the OPPOSITE direction to obtain the gist of the symbol energy in a line!

Second, the eyes of the central character in an Arcanum or Trump Card and a Court Card are always taken into consideration.

So rather than bank books and bills the 3 card linear draw  above can be interpreted in a much different way as a divinatory directive.  The line when read right to left starts with The Lovers or Bifurcatio -the fork in the road, which reminds us that  in all 3D situations  there is a sacred, profane and mundane aspect, shown  by the 3 parts of the Tarot deck as the Pips, Courts and Trumps. One follows the Eyes of the Oracle aka the second Trump who is the Protagonist for the sacred aspect of this message.

As the Oracle of the Matrix said to Neo “you have already made the choice you are here to see why.” The “coins” with the High Priestess looking directly at them are not mere coins but magic seals or sigils. The seventh seal of Her Book of Mysteries has been opened. She is saying to look to The Chariot the seventh Arcanum for the methodology to conquer. The pips or the numbered cards in suit of disks / wheels/ quanta are denizens in the realm of the sacred, seeds which evolved into the first ten Trumps.

The Matrix is 3D physical & 4D metaphysical – a day and night dream/mind fuk. What you “see” day & night are physical & astral avatars or containers of energy. In 4D night dreams there are shapeshifting “spirits” who like any actor can appear costumed as whatever character they pluck from your mental closet. Ask the apparition their name which should match their appearance. If they refuse- they are lying; if they give another name YOU KNOW they are LYING, and if they comply by giving the name of the form they are wearing & lie- POOF they will disappear! CLEAR??? 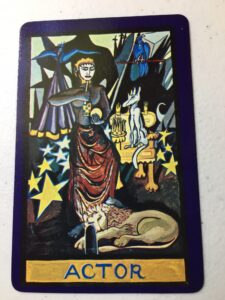 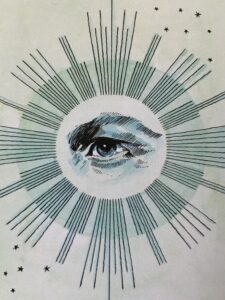 The Source reflected the Primordial entities- from them came many Divinities and from Them the galactic lineages. This is the true Origin message. What ouur Elders remembered when they said the first Ancestor was Source or the Most High.
Image: Eye of Providence, Zigeuner (gypsy) deck, Piatnik 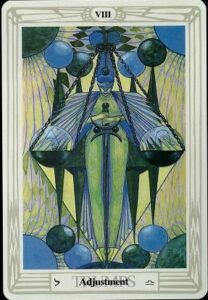 Warning: The end of a cycle is not a time to create Karma which is a debt & /or credit transferable to/from incarnations. Created Karma comes from interference with the free-will of another ensouled being. Some call it spell-work. What you do to another does come back to you as trading places aka Boomerang Baby! However, at a cycles end transmorgification kicks in with either a leveling up or a downgrade of species density. Light as a feather, heavy as lead.
Image: Adjustment/Justice Trump from Crowley’s Book of Thoth. 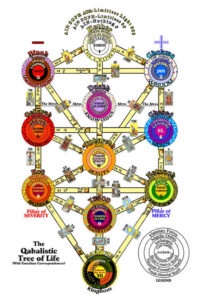 Tarot is intimately associated with the Kabalah and Western occultism. The lodges used Tarot in conjunction with their rites. Any good mapping or tracking device  has a legend which tells the  meaning of the symbols and the scale used on that map.

With Tarot the” legend” is the Tree of Life.  The Tree of Life shows how  Tarot is used. The four worlds, the four elemental powers or suits all relate to the Minor Arcana, the pip cards relate to each of the Sephira on the Tree. 4 x 10 is 40. The Court cards  are 4 x 4 or 16 and are an aspect of the Tree as well. The 22 Major Arcana are aligned with the lines or paths joining the Sephira on the front face of the Tree.

The function of the Tarot as divination can show where a person is in terms of energy by referring back to the Tree of Life.  Divination deals with energy of the Body, Mind, Emotions, and Awareness. It is not a means to evaluate romantic relationships or to predict future happening- that is fortune telling which is better handled, i.e. more detailed when using  a 36 card or decan deck or a modern set of the Minor Arcana  with Court Cards aka a standard deck of 52 “playing” cards not the full 78 card  initiatory tool that is the  “book” of Thoth. 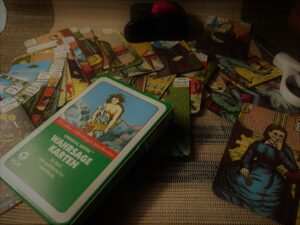 I first began to read Kipperkarten and blog about it while on a break from Lenormand  studies in early 2012.  It was then I came across the Master Card method on a YT video. I did not further investigate or incorporate it into my readings.

Later in the Fall of 2016  I took a course with Toni Puhle, the Stop Card method was mentioned as specific to a style of reading and  layout she taught. The Stop Card is like the period in a sentence, it ends the line and no more cards are placed after it falls.

Both the Master Card and the Stop Card sound somewhat similar in function. However, if one is reading the full deck  or Das Grosse Blatt neither are needed as the borders of the reading are already defined. The Nine Card Block which is the core used to investigate  person  & situation cards is a major key unpacking the information in a  9 X 4 layout.

I often use the Stop Card Reading Toni Puhle taught as it is usually a smaller  and faster layout, but it can grow in size when the additional movements of certain cards in the method are taken into consideration.

Kipperkarten when learned from  German sources is the most accurate fortune telling deck I’ve encountered.  Celebrating ten years with Kipperkarten and still loving it!

In the using of the Kipper deck whether in the full layout or with smaller ones often the column associations of the card placements are overlooked. The basic image below shows the cards in numerical order. Take for example the third row which contains the “person card” or card 12 Rich Girl on the second horizontal line.

Over the head of  card 12 is card 3 relationship which says that she is thinking about a relationship and below her is card 21 which is The Living Room which can mean the Rich Girl is involved in a  living together relationship. Beneath card 21 in the layout shown is card 30 The Court Person which can indicate arguments or differences being discussed or aired out in that living situation. Card 21 also contains  a timing element, which is very helpful to the Reader.  All of this is shown in the four cards of the vertical line. A reader looking for the Rich Girl as a daughter, younger sister or close younger female friend of the Querent can get all of the details about her on the vertical line. Life situations which are depicted on the non- person cards can be given depth as well when  read on the vertical columns in Kipper.

The horizontal line of a person card is interpreted based on the way the person card faces to show the progression of events.  What is behind the person card are prior  causes and what goes before it is what will soon manifest as effects. Since the Rich Girl is flanked  by money cards- finances  are the cause & effects which lead to an exodus (10 travel).

Line three across : 10-Travel; 11 Lots of Money – 12 RICH GIRL – followed by 13 Rich Guy.  The Rich Girl facing 11 Lots of Money as a secondary meaning may also indicate  large expenditures while the 13 Rich Guy behind  card 12 can represent incoming monies being diminished as that card faces in an opposite direction. Rich Guy, card 13 represents finances or securities – and is not  a “person card”.  The  male counterpart to Rich Girl is actually card 22, The Military Person, who appears firstly as son, brother, or a close in age male friend.

THE DECK SHOWN BELOW IS REVERSED AS THE ORIGINAL WAS IN FIRST PRINTING!!! 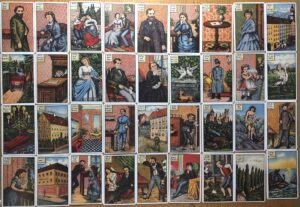 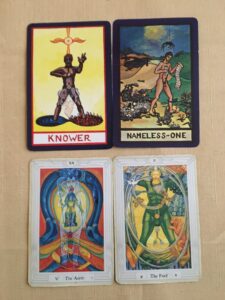 The insert shows T: The New Tarot (Cooke) above and the Thoth Tarot (Crowley) below. In Tarot notation there are 22 Trumps but the Fool card is unnumbered. It starts and ends a cycle or sequence in the Trumps. Thus it can be the 22nd card since traditional ranking in Tarot makes the World the 21st card.

Judgment is the 20th card and represents the first two numerals of the calendar year or 20 which is actually the 21st century.  In Cooke’s deck all the Trumps are unnumbered. Judgment in the New Tarot deck is named the Knower, the part of us that functions as the Essential Self. For others this aspect is the Observer.

The Nameless One is the equivalent of the Fool, the aspect of humanity which comes into an incarnation to experience sentience in 3D existence.

Judgment or Trump 20 according to Crowley is the current Aeon or timeframe. It a convergence of  sentient beings upon the Earth for a chance to be 1) raised up or resurrected to a higher energy frequency; (2) be changed or enter sentient into a different type of vehicle or  vessel (3)  or to simply live in the flesh again.  The end of a cycle or era is when everyone wants to be present at the Big Game whether in the stands or out on the field.

Winners and losers both will have experiences but will they remember them when all is said and done? The Fool or Nameless One carries the basic genetic codes  in the scrolls of the Nameless One in Cooke’s deck and in the more traditional Tarot deck as a bag on a stick but the novice or the initiate has to develop their skills by walking the path of life to put the pieces together.

This is what the energy of  2022 shows -Man making moves on the physical plane; Man navigating the wetlands of the psyche in the Astral;  Man  holding on to hope for their team’s victory when the final buzzer or Trumpet sounds.

Are you ready for some football? 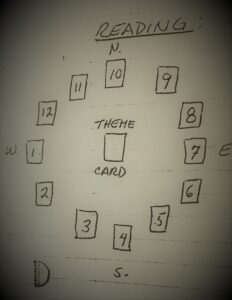 This is a page from an old notebook.

The reading of the New Year can be done on one’s Natal Birthday or it can be done on New Year’s day.  The prep is no sexual contact  for 24 hours prior; a thorough cleaning of the whole house; taking a ceremonial or herbal bath and donning all clean clothes.

Before shuffling take a moment to acknowledge and give thanks to one’s spiritual allies.

Starting at the first position in the diagram lay out 12 cards counter clockwise. Each card is the monthly adaptation of the theme card’s energy in the coming year. Your  Theme Card is paired with the card of the month. These pairs will reveal an energetic tone.

This layout is  to be done with a standard  78 card Tarot deck, in the RWS or Marseille style.